Preparation of Porous Ceramics with Silica Fume and Alumina Powder

Porous ceramics have been widely used in many fields due to their excellent performance, such as bioceramics, catalyst supports, high temperature gas filters, sensors and membrane reactors. Compare with ordinary mullite which already has a relatively low thermal expansion coefficient, good thermal shock resistance, mechanical strength, and chemical stability at high temperatures, porous mullite has even lower thermal conductivity and is more suitable for thermal insulation.

In the test, alumina powder and silica fume, an ultrafine amorphous powder with high SiO2 content, are used as the raw materials, with gel casting and pressureless sintering as the techniques, for the preparation of a porous ceramic material with mullite as the main crystal phase. The effects of the sintering temperatures and the ratio of alumina powder to silica fume on the formation of mullite, the structure and mechanical properties of porous mullite ceramics are studied. 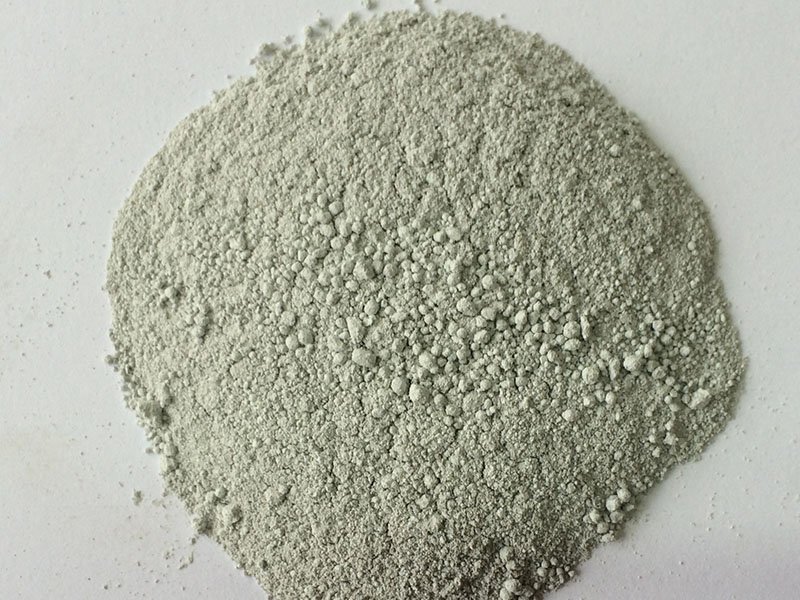 Effect of temperature on the mullite formation

From the TG-DSC curve, a small endothermic peak near 100 °C is caused by the evaporation of water in the ceramic green body; Two exothermic peaks appearing near 410 °C and 610 °C correspond to the oxidation reactions that occur after the main chain and side chain scissions of polyacrylamide, which also lead to the quality decrease of the green body; At the stage of 1200 – 1400 °C, the mullite reaction between silica fume and alumina occurs, it is a dry media reaction with small thermal effect, so there is no obvious endotherm in the curve.

The effect of different temperatures with a 3 : 2.5 ratio of Al2O3 to SiO2 is tested. At 1200 °C, silica fume does not react with alumina to form mullite, but changes from the amorphous state to cristobalite. At 1300 °C, the mullite reaction between corundum and cristobalite starts to occur. As the temperature rises to 1450 °C, mullite becomes the main crystal phase, with purity above 90%. At 1500 °C, due to a large number of liquid phases around mullite, impurity ions in the liquid phases contribute to its decomposition, thereby the mullite content of the sample reducing. It can be seen that the temperature has a great influence on the formation of mullite, and 1450 °C is a suitable temperature.

For all the samples, the main crystal phase is mullite, and the second crystal phase is corundum. The content of corundum varies with the ratios of Al2O3 to SiO2, of which, the 3 : 2.5 ratio has the lowest corundum content.

For samples with an Al2O3 to SiO2 ratio of 3 : 2.5 and different temperatures, the results show that the compressive strength first increases and then decreases with the temperature increase. This is because the strength is closely related to the mullite content. At 1450 °C, it reaches 369 MPa with a relatively complete reaction. When the temperature reaches 1500 °C, due to the decomposition as mentioned above, the compressive strength decreases to 260.93 MPa.

With the increase of temperature, the density first increases, then decreases, and stabilizes. This is due to a certain amount of alkali metal oxides with low melting points (Na2O, K2O) that silica fume contains. Liquid phases accelerate the sintering and solidification before the temperature reaches 1300 °C. And they also accelerate the mass transfer rate, and the mullite reaction which increases the volume thereby the density decreasing. During the stage of decomposition, the density slightly increases, and then stabilizes at 2.5 g/cm3. The density of mullite is 3.16 g/cm3. By calculation, the total porosity of the sample at 1450 °C is about 21%.

The irregular porous structure of the samples is from the rapid volatilization of tert-Butyl alcohol. As the temperature increases, the vitrification phenomenon is more pronounced. A large number of mullite crystals not only are conducive to the stability of the porous structure, but also impart higher strength to the material.